When a job is too expensive…let it go… 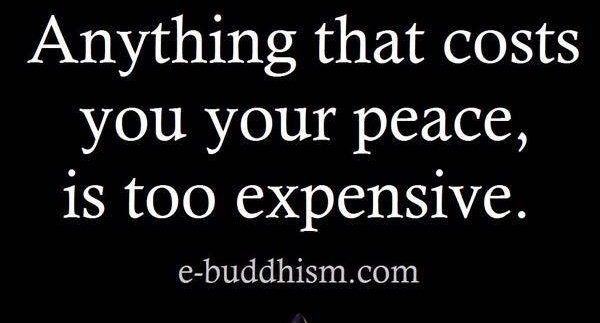 A whatsapp forward today morning started a train of thoughts. The forward is a wonderful quote “Anything that costs you your peace , is too expensive”. It clearly resonated my feelings about some business I was doing with a technology firm.I just ceased a relationship with a well- paying and well-meaning client. I worked for the organization for over a year, and finally we were getting to a point where I was feeling confident about the new culture that I was trying to imbibe into the organization.

Employees were now beginning to feel more confident about the competitiveness of their organization vis a vis the salaries and other benefits. They were happy that communication was clear and transparent. As an HR Advisor, my role was to build a robust sense of trust and credibility amongst the employees. Trust and confidence is never an overnight achievement, but takes effort and consistency over and over again by the Management/ Promoters. It is only repeated efforts that can lead to employees putting their faith in the management and then accept new initiatives.

I sensed two kinds of people who worked in the company, the indifferent ones and the ones who scuttled around like frightened mice. My real work was to get the indifferent ones engaged, and the frightened ones to be able to rid of their fears and speak their mind. In both these initiatives lay the organizations redemption, or else it could continue to hire and fire. Employees and I began to warm up and building a fine camaraderie. The more self- assured employees were, the better they performed. Some weeding out happened along the way, which is a good idea as cynicism and negativity can mar the best of intent.Unless a person does not feel competent enough, there is a tendency to shirk responsibility and accountability. This was my next challenge, I was now in the middle of setting the stage for building in responsibility and accountability in the slightly more confident staff. I urged the departmental heads to explore key resources and reinforce and reward desirable skills and outcomes.

Like an astral body, or an aura, which is only visible if you have eyes to see and the heart to sense, to look more deeply, and then the willingness and openness to accept, organizations too, have their own aura and an astral body, which is different from what meets you on the surface. I could sense and ‘see’ the brokenness being fixed. The organization was moving away from its pain body and baggage, and getting into its new, kinder more compassionate and creative form. My agenda and priorities with people is relatively more intuitive and sensing. At times I deliberately choose to ignore, lapses, or some evident gaps in personalities/ traits, for I know that some are auto corrected over a course of time. Make a person successful once, appreciate, and the employee will continue to surprise the organization with more.

This ‘invisible’ part of the organization, does get backed by employee engagement surveys and analytics of sorts. Hard data and analytics is comfort food for the logical mind. Nevertheless being the HR Advisor, I do it for as a part of my basic checklist. Employee Engagement data looked encouraging , until one fine day, I sensed the communication from the owner was based on distrust. It left me a bit disturbed, and slightly undermined, but I just let it go. In all fairness, much later I offered pro-bono services to the firm until they found a suitable replacement. The offer was turned down and I was required to continue on the existing arrangement.

It was not until, my little boy broke down one fine day, telling me how I was perpetually annoyed with him and yelled at him all the time. This tiny soul, pointed me to who I was becoming….a nasty parent. It took me a week to understand the pattern. The source of my stress was from a client whose stakes were high. The owner barely trusted anyone. Being at a distance, the owner was vulnerable, and more prone to pick up negative information on the employees, than look objectively. Vulnerabilities and distrust was imposed upon the organization. I was becoming a part of the vicious cycle. The owner had returned to hard to resist old habit of distrust and seeking negative inputs about staff.

My son’s meltdown was a strong enough signal for me to bid the assignment a hasty farewell. I was not going to allow some remote insecurities damage a growing child. I was not willing to build some terrible memories for a future adult to look back at. The goal is to be a loving parent. Being a loving self is non- negotiable.